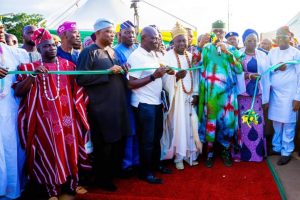 The Ogun State governor, Dapo Abiodun, on Wednesday, inaugurated the 2.4km Oke-Ola Road in Imeko-Afon Local Government Area, declaring that his administration has moved from the era of ground breaking to period of projects commissioning across the state

Speaking at the event witnessed by top political functionaries, party stalwarts and traditional rulers, Abiodun noted that the road is strategic to the economic development of the Ogun West Senatorial District and the state in general.

“We have gone beyond the era of ground-breaking, this commissioning is therefore a departure from the past as it is the first to be done in Yewaland in many years.

“The Paramount Ruler of Yewaland, Oba Kehinde Olugbenle always says all the previous administrations used to do was to come to Yewaland to do ground breaking after ground breaking, they never commissioned. And I said to Kabiyesi that by the grace of God, we are going to break that jinx and today is a historic day not just in the history of this state, but in Yewaland.

“This administration is three years and four months in the saddle, it has started that process of commissioning roads and we have started right here in Imeko-Afon LG”, he stated.

THE FEDERAL GOVERNMENT IS BEING BIASED TOWARDS AMOTEKUN: ONDO GOVERNOR BLOWS HOT