Speaking at the presidential reception in honor of the team Nigeria contingents to the 2022 Commonwealth Games and world athletics championships held in Abuja, president Muhammadu Buhari has approved the national honors and a cash reward of n200 million on the athletes who represented the country.

Congratulating all the awardees and recipients, the president said his government is committed to rewarding excellence, no less for members of team Nigeria who ignited the spirit of victory in the nation through stellar performances at international competitions.

The president, who described the athletes as champions, worthy ambassadors, national heroes and heroines, heaped praises on them for proudly flying the Nigerian flag in nine sporting events.

The president told the athletes that their hour of sporting glory beamed the ‘‘radar of the world on Nigeria’’, adding that their exploits have gone a long way in projecting the positive image of the country.

”twelve times the world stood still as our green, white green national flag was hoisted and the national anthem recited. Thirty-five times we made it to the podium. You all team Nigeria made that possible.

”you brought glory and honor to our country. And today, on behalf of the nation- I say, thank you!” 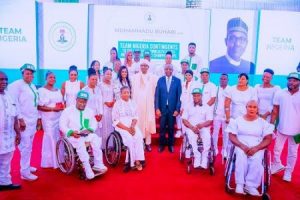