The Olojo Festival is a very significant annual traditional celebration in Ile-Ife, Osun State. It is a culture festival in the calendar of the Ile-Ife. It is believed to be a celebration of the remembrance of “Ogun”, the god of Iron, who is believed to be the first son of Oduduwa, the progenitor of the Yoruba people, the Olojo festival began during the reign of the third Ooni of Ile-Ife. 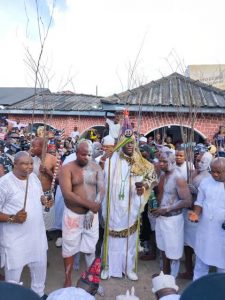 For the Ooni of Ife, Oba Adeyeye Enitan Ogunwusi, the Olojo festival is a celebration of the dawn of creation, and he believes that it lent credence to the belief that Ife is the cradle of human existence. 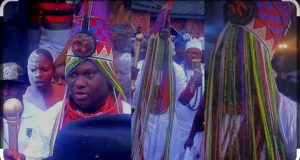 Traditionally, the Ooni goes into seclusion at a shrine seven days before the festival to perform traditional rites and meet the gods. The Palace spokesman, Moses Olafare said the monarch used the period to offer prayers for peace, unity, and development in Ile-Ife, Osun State and Nigeria.

It is generally believed that when the king comes out from the seclusion, he would be highly possessed with spirits and the gods would accept whatever he says. Therefore, the day of Olojo festival is the day Ooni comes out from seclusion and his subjects wait to receive his blessings. 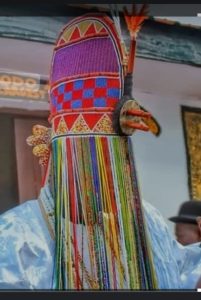 On the day of the Olojo festival the king is adorned in the spiritual crown of his forefathers, the crown is known as “Aree” Aree is a sacred crown inherited by the king and that it is the physical symbol of authority of the Ooni of Ife.

Legend has it that the Aree Is the same crown used by Oduduwa in his lifetime, The crown was made with 149 objects such as cutlasses and hoes, and it is very heavy. It weighs 100 kilograms. This crown holds great significance in the Olojo celebration. The Ooni of Ife is the only person that can wear it, and it is only worn during Olojo festival.

This year’sOlojo festival which formally started on September 17 had Various cultural groups of Oodua spotted around the palace in their colorful attires.

Also, present were worshipers of Osun, Sango and Ogun who had filed out to pay homage to Oba Ogunwusi. The chiefs in their traditional regalia and staff danced as local drummers entertained the crowd in very peculiar ways. People from different family compounds in Ife came out to also pay homage to the Ooni as entertainers performed before the king, praying for him.

Oba Ogunwusi while speaking on the significance of Olojo festival said “It is the day all the creation converged and the melting point is the sacred Aree crown. It is the creation that brought about the entire world. The creation of the new dawn and the very first day in the world is what we are celebrating here.

This festival is sacred and spiritual, that is the day that Aree crown comes out. The spectrum of the rainbow is called Osumare. It is the bunch we have inside and outside Aree crown, it depicts the color of Africa, the black race is linked to multiple colors he said, 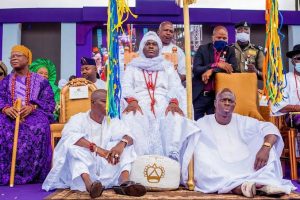 The Minister of Interior and former Governor of Osun State, Rauf Aregbesola who represented President Muhammadu Buhari at the event congratulated the Ooni and the people of Ife on the occasion.

The minister on behalf of the President charged Nigerians to promote and preserve their cultural heritage, saying that the culture of the people is the identity which gives them recognition. Buhari expressed delight that the people of Ile-Ife, the cradle of Yoruba had been so passionate and committed to the preservation of cultural heritage and urged them to continue in that manner as it had portrayed the country in positive light.

Also speaking with newsmen, participants expressed joy at being able to be a part of the memorable celebration.

A Canadian-based Doctor had this to say” I had to travel back home to be a part of this remarkable festival, it is time the whole world gets to know about how rich the Yoruba culture is, I am delighted with what I have seen here, the traditions have been passed from generation to generation, and it is elevating to know that the Current Ooni of Ife has not failed us or our ancestors”

He prayed for the wellbeing of the Yoruba race and the country at Large.

Others believed that security challenges of the country will improve greatly, bearing in mind that the Royal Father had made prayers for the country’s development in all ramifications.