The semi-final of the optima energy gold cup 2022 was played on Thursday in Ikenne between REMO stars and sporting Lagos. The game that almost followed the controversial path of Niger tornadoes last group stage game against same Remo stars. 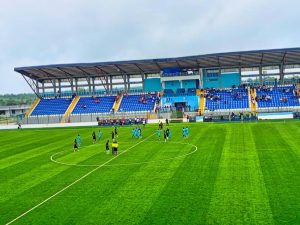 The only goal was scored in the 48th minute, but it seems not to be accepted by sporting Lagos after which they protested heavily claiming it should have been a fair play because of the foul committed on Sanni, their jersey no 8 wearing player and former sky blue guy.

After much review, checks and complaint, the goal stood, and the sky-blue stars took the lead. Sporting Lagos remained resilient through the game, but their resilience couldn’t produce a goal for them.