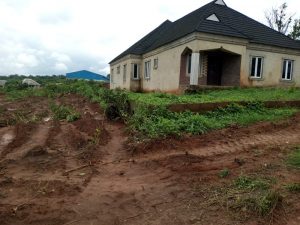 It was gathered that the Residents rushed to the palace of the Ewusi of Makun, HRH Oba Timothy Oyesola Akinsanya, to lodge a complaint on the illegal encroachment of their lands at Oke-Egun village.

They said they had awakon to see strangers claiming to be government officials without any form of identification, bulldozing the land that rightfully belong to them

Mrs Akinola, one of the landlords said They met with the Ewusi and he called the area Commander to give him some Policemen to visit the area in person.

On their arrival at Oke-Egun village, they saw some policemen already on the scene of the disputed lands, Upon sighting them, the area commander invited them all to his office but the policemen immediately disappeared into the thin air when they got to the entrance of the area Commander’s office. Their disappearances gave an impression that they were on illegal duty.

Another resident who spoke to our corresponded said there is need to confirm and affirm the authenticity of those strangers laying claim that they are from the government. And the government should confirm if truly there was an acquisition.

A meeting has been scheduled on Tuesday, the 4th of October 2022, at the Ewusi,s Palace Makun, with a view to getting to the root of the problem and if possible proffering a permanent solution .

All parties involved in the land dispute are expected to be in attendance.