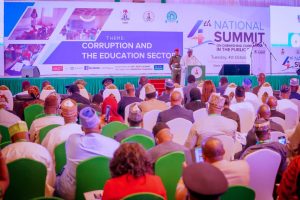 Buhari conferred the award on Amah, a Superintendent of Police (SP), at the fourth national summit on diminishing corruption in the public sector, held at the State House Conference Hall, Abuja.

The one-day anti-corruption summit, with the theme, “Corruption and the education sector”, was organized by the Independent Corrupt Practices and Other Related Offenses Commission (ICPC) with the Office of the Secretary to the Government of the Federation (OSGF) and the Joint Admission and Matriculation Board (JAMB).

The President called on Nigerians holding public offices to emulate the awardee’s exemplary character with a view to fighting corruption in the country. According to Buhari, “We need to kill corruption for Nigeria to move forward.”