33 illegal migrants have been apprehended by operatives of the Ogun State Command of the Nigeria Immigration Service, in two locations in Odeda Local Government Area of the state. 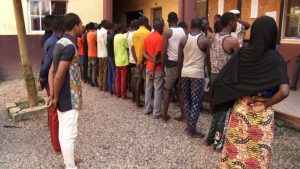 The suspects who were paraded at the command’s office along the Presidential Boulverd in the state capital, had no valid travel documents and no means of livelihood.

The state Controller of Immigration, Yakubu Jibrin who revealed that the illegal migrants are from Togo and Chad, asked members of the general public to be more vigilant, especially in face of the current security situation in the country.

The suspects will be repatriated back into their countries of origin after due consultations.