The unity of Imams and ALFAS I’m Ogun state popularly known as ITTIHAD has felicitated the Akarigbo of Remo, Oba Dr. Adewale Babatunde Ajayi on his 60th birthday and 5th Coronation anniversary celebration. 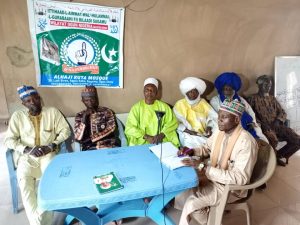 ITTIHAD is a united group of Alfa and Imam established in the year 2013 with the aim of bringing together all Islamic clerics residing in Ogun state but from different states respectively.

Celebrating the king, the chairman of the Islamic group, Sheik Sirajudeen Abioye recounted how awesome the reign of the king has been, and coveted the kind of wisdom the king has.

“Akarigbo is a smart and active man. We appreciate him for how well he has balanced and brought together people of different backgrounds and beliefs without fight and quarrel. He settles disputes with wisdom and that’s appreciated by everyone”he said.

The speaker general of the group also prayed for the king and hoped he stays on his father’s throne for many years, as his reign has been so peaceful for everyone.