Oyo state Governor, Seyi Makinde, yesterday, reiterated the determination of his administration to make the state conducive for business.

The governor, who stated this in his office, while receiving the Deputy High Commissioner, Government of Canada, Teshome Nkurumah and Trade Commissioner Assistant, Benedicta Emovuon, on a courtesy call, said that the state would continue to collaborate with partners and stakeholders on agric business to develop the state’s economy.

The governor also said that the state remains open for business and meaningful collaboration.

Earlier in his speech, Nkurumah hinted that the team was coordinating an agricultural outreach and trade promotion in the state to understand areas of prospects, as well as opportunities to facilitate partnership.

“It is indeed a pleasure to be here. We are conducting an agricultural outreach, which is one of the sectors we focused on for trade promotion with Nigeria.

“So, we are here to listen and learn. The whole goal is just to reconnect, get acquainted to understand what your priority is and how you are aiming to develop the agricultural sector in the state.a

“We equally want to see if there is an alignment between the Canadian priorities and government priorities, and where we can do business.”

Similarly, the Canadian Government has expressed its readiness to collaborate with the Ogun State Government in the area of agriculture.

Nkrumah, who disclosed this during a courtesy visit to Governor Dapo Abiodun at Oke-Mosan office in Abeokuta, said that the Canadian Government was on a mission to find out the opportunities in the local market.

Nkrumah, who also noted that it is the plan of the Canadian Government to do business and boost trade between Canada and Nigeria, said that there would still be more to grow in terms of opportunities if both countries are very much focused and structured. 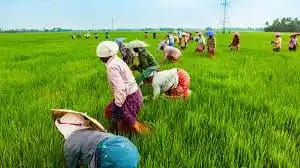 In his response, Abiodun, who expressed his administration’s willingness to collaborate with the Canadian government on agriculture, said that the visit was another way of deepening the existing relationship not only with the state but also between Nigeria and Canada in promoting trade, particularly agriculture.