Remo stars FC on Wednesday played host to the shooting Stars at Ikenne in the match day three game of the Nigeria Premier League in what is believed to be “South West Derby”, the game started at exactly 4pm. 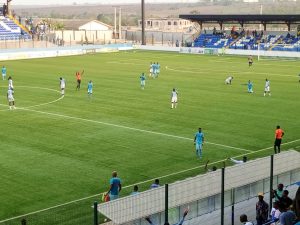 Coach Dan Ogunmodede and Coach Ogunbote have a present history of football coaching friendly and producing one of the most competitive games in the NPFL, which was evident in the match day three encounter.

The first half of the game ended at a goaless draw after a befitting display from both teams having their specific chances but not able to make a recording conversion of it.

The first goal of the game came in for Remo stars at the 60th minutes mark after a tactical square play from their talis man, Andy Okpe, but the goal was recorded as an Own goal to give the sky blue stars the lead.

Godwin Odibo on the 72nd time mark doubled Remo stars lead after another goal In the game to bring the score line to 2-0.

Coach Dan Ogunmodede expressed how happy he is with the win. In his words, he said” I’m really proud of the guys. We all knew this game wasn’t going to be an easy one because it’s the south-west derby, but at the end of it all, we came out victorious”

“We are not going to feel comfortable because the season is just getting started, but one thing I can say for sure is that the confidence level of the guys is admirable, and I hope they continue like this”

“Like I used to say, anytime we come on the pitch to play, we’re coming with the mentality of a Victor. Of course, we still have some things to correct and work on. We enjoy this moment and prepare for our next game because we need to keep winning” he added.

Remo stars now tops their group with nine point from three games. This is similar to their record in the 2021/2022 season of the NPFL.

Manchester united Mason Greenwood Has All Charges Against Him Dropped