The Ogun state Governor, Dapo Abiodun in a statement released through his chief press secretary, Kunle Somorin has announced a Cash reward of N5m and a house to Oluwatobi Amusan, the commonwealth and African 100m champion. 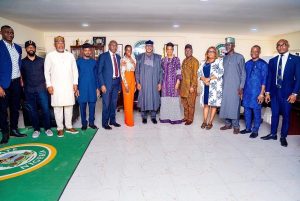 The statement in parts read, “So, you (Amusan) will be our Sports Ambassador; I am happy that you said you are not from any other state. You are from Ogun and not from Lagos and you want to come back home. We also want to ensure that you come back home. We want to assure you that as you come back home, you have a home here in the state. So, in view of that, we are also going to be presenting to you a home in Ijebu-Ode. On top of that, we will be giving you a small token, we will be donating to you the sum of N5m.”

Abiodun noted that his administration was on course to giving the Ijebu-Ode Stadium the necessary facelift it needed.

In her remarks, Amusan, while acknowledging the support of Abiodun towards her success, called on the Federal Government to do more for athletes.

“All thanks to my Governor for supporting me and I feel the Federal Government can do the same when it comes to supporting athletes financially,” she said.