Three persons lost their lives in the early hours of Sunday, in the Obada area, along the Lagos-Abeokuta expressway in a head-on collision between a car and a truck. 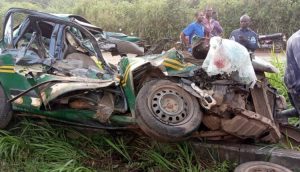 The Federal Road Safety Corps in a statement said the accident involved a Volvo Mini Truck and a commercial taxi car.

The Ogun State Sector Commander, Ahmed Umar, said that the accident occurred at about 7:15 am and was likely caused by route violation on the part of the driver of the truck marked AKM 489 ZY.

He informed that five male adults were involved in the accident, with three dead and two seriously injured.

“The suspected cause of the crash was route violation on the part of the truck driver which resulted in head-on collision with the car which has no registration number,” he said.

He added that the injured victims were taken to General Hospital Abeokuta for medical attention and the corpses were deposited at the hospital’s morgue.

Umar commiserated with the family of the victims and advised motorists to avoid route violations completely.

“Safety is everybody’s business, especially in this season of high vehicular movement, one should drive cautiously and obey traffic rules and regulations,” he said