The Economic and Financial Crimes Commission, EFCC, and the Office of the Auditor General of the Federation, OAuGF, are to intensify cooperation in the fight against economic and financial crimes, including corruption. 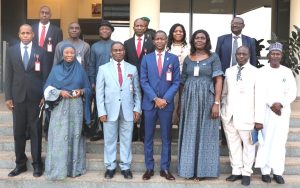 This commitment was among the highlights of discussion today, January 23, 2023, during a Courtesy Visit to the headquarters of the Commission by the acting Auditor General of the Federation, Dr. Andy Onwudili.

Onwudili, who was accompanied by directors of the OAuGF, said his visit was meant to strengthen the existing collaboration between the EFCC and the Office of the Auditor General of the Federation, noting that the mandates of both organizations were similar and critical.

He commended the efforts of the EFCC in fighting economic and financial crimes, noting that the Commission’s record of 3785 convictions in 2022, as against the 2220 recorded in 2021, were encouraging.