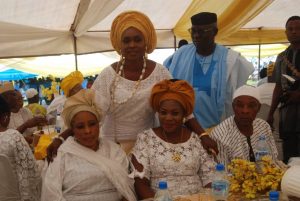 The final burial ceremony of Alhaja Mulikat Onafowokan popularly known as Alhaja 10-10 by old and young in Sagamu, took place in Wesley School, Ojumele Sagamu on Monday with many dignitaries and politicians in attendance.

Alhaja 10-10 who had reportedly died on the 3rd of August at age 97 was buried as soon as possible according to the Islamic tradition.

She was survived by her children and grandchildren. Abdul-Azeez Abiodun Nuratulai and Onafowokan Adetutu Sekinat revealed that the death of their mother is a great loss, and she would be missed greatly.

According to Fridaus Alabi, a granddaughter of Alhaja Mulikat Onafowokan she said, her grandmother has been a god-mother to her and her friends and she will truly miss her a lot.

The attendance of the dignitaries and politicians cut across Sagamu in particular and Ogun State in general in a bid to support and deliver their well-wishes to the children and grand-children of Alhaja Mulikat Onafowokan AKA Alhaja 10-10.