Arsenal frontman, Bukayo has been announced and awarded the England national team men’s player for the 2021-2022 year. This was announced on Twitter by the team. 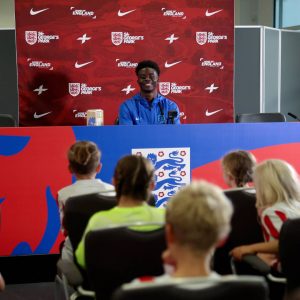 The award was presented to him by a local grassroots team, after which a question and answer session was conducted in the press conference hall.

The announcement of Saka as the player of the year has generated many controversies on social media, as a lot of people believe he doesn’t deserve it. @MSpurs1882 said,” This has to be a sympathy award because of what happened after the Euros. No other explanation.”

England, however, continues in the UEFA Nations League as they play against Italy in league A: Group 3 game on Friday night.